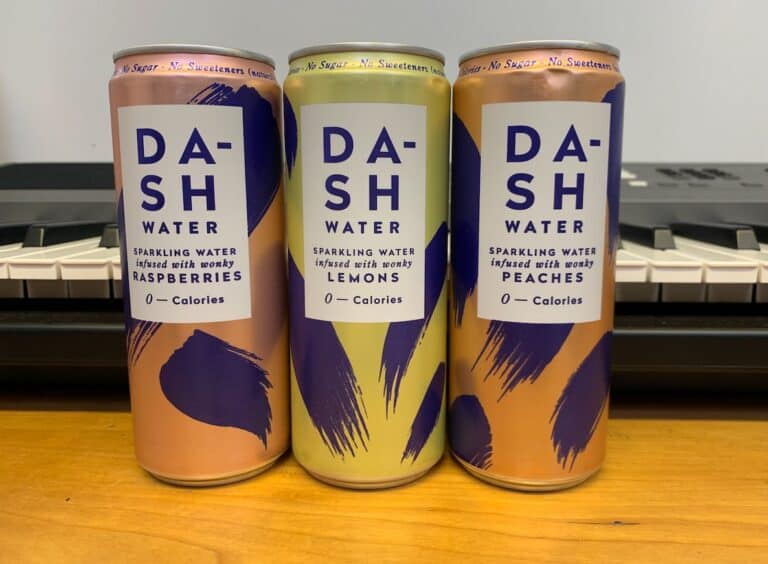 Flavoured sparkling water is all the rage these days, with people seeking a healthier alternative to both sugary soft drinks and alcohol. Dash is fast becoming one of the best-known spritzer brands in the UK and beyond, and in this Dash water review I look at whether the products are worth your time and money.

I drink a LOT of spritzers. I quit alcohol several months ago, and didn’t want to replace it with empty calories with unhealthy soft drinks. I get through cases upon cases of sparkling water, so thought it would be fun to review and compare them.

You might not think there could be much variation between different waters flavoured with a bit of fruit. However, it’s surprising how nuanced they can be – both in flavour and brand ethos.

So let’s begin this Dash water review with a little about the company.

UPDATE: Dash is currently offering a BIG 40% discount on all products. Click here and use the code WONKYWATER40 to make use of it.

A Bit About Dash Water

Dash water is a product from the UK. It’s made with sparkling spring water and “wonky fruit.”

This rather charming use of words refers to fruit that would perhaps otherwise not have been used for anything. Perhaps I’m a sucker for the marketing but I find this rather endearing, and it’s obviously great from a sustainability perspective too.

Although Dash water is UK based, I note that the company is already branching out to other counties, and has a presence in the US. It will be very interesting to see if Dash makes a dent in the sales of La Croix, undoubtedly America’s most well-known seltzer brand.

In this section of my Dash Water review I’m going to look at each of the flavours in turn. There are five flavours available and four are covered here. I’ve yet to try the cucumber flavour, and have to say it doesn’t massively appeal to me. But I will come back and update my review of Dash as and when I do.

It’s obviously important to emphasise, especially to people new to drinks like this, that a sparkling blackcurrant water isn’t going to taste like Ribena! All Dash flavours are subtle, and the aromas carry more strongly than the tastes.

However, this is thirst-quenching and clear tasting, with a distinct essence of blackcurrant. Once you’ve adjusted to these, the flavour is more than enough.

Lemon-flavoured Dash is perfectly refreshing and enjoyable. It has a simple lemon taste and is neither too sweet nor too sour.

While I enjoy Dash lemon, it’s probably the flavour I’m least excited about when I blindly pull a can from my mixed case. I think this is, in part, because I’m a real fan of the lemon and yuzu from the Loveau Water range (reviewed here). This is still good, but it’s not as good.

The first time I ordered Dash (spoiler: it wasn’t the last!) I was dismayed to see a peach flavour, because peach isn’t really my thing. Peach makes me think of drinking Archer’s liqueur as a teenager – sickly sweet and the cause of some of my earliest hangovers!

But Peach dash is very different, because there’s only the essence of the fruit in the drink. This lack of sweetness is a good thing – for me anyway. A good natural flavour that I always enjoy.

Dash raspberry is a little like the lemon – perfectly enjoyable, perfectly pleasant, but rather more competent than outstanding.

It’s a good natural flavour, but just doesn’t shine quite as much as the blackcurrant for me. With this one I always find myself wishing the taste was a little closer to the smell.

There’s not a huge amount you can say about the ingredients of Dash – because there aren’t very many of them. But if you’re keen to live a healthy lifestyle that can only be a good thing!

Obviously the main thing is carbonated water, and it’s carbonated spring water – not water from the mains supply. It surprised me to find out that quite a lot of the producers of these products do use mains water. Then there’s a bit of acid, citric acid, and the essence from the wonky fruit.

Although these waters are marketed as “no calories,” there’s actually one or two per 100ml, but it’s such a negligible amount it doesn’t really count. Presumably it doesn’t count officially either, since all of these water brands state “no calories.” As I said in the review of another spritzer water, you’ll burn one or two off picking the can up!

As I said above, I try many different sparkling waters, but Dash is one of the ones I keep coming back to.

The reason I like this brand is because all of the different elements converge in a pleasing way. It’s spring water, not tap water, the flavours are good, and – well – I’m just sold on the idea that you’re helping that “wonky” fruit meet its destiny.

In recent months I’ve started to love having a “Dash stash” in my home. If you’re looking for something healthy and refreshing, why not get one of your own?

Where to Buy Dash Water

Use Promo Code WONKYWATER To Save 40%

A great sparkling water brand with a growing reputation. Could well soon become the British equivalent of La Croix.