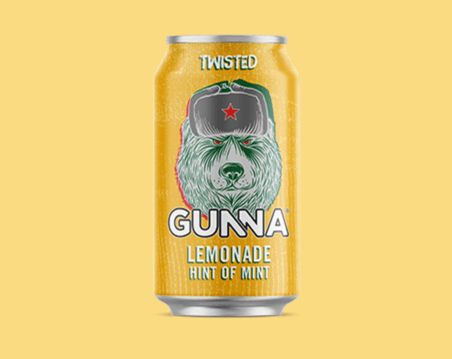 I’m rather obsessed with “craft” sodas at the moment, and in this Gunna drinks review, I’m going to talk about a range that’s really doing it for me right now!

As regular readers of this blog will know, I quit drinking alcohol a while ago. I drink a lot of soft drinks now (unsurprisingly!) and Gunna drinks came to my attention via a Facebook ad. I bought myself a mixed case and I’ve re-upped my supply on several occasions since!

In recent weeks we’ve been allowed to socialise a bit again, and every guest who’s tried these drinks has been impressed.

I don’t give out praise easily but you’ll find plenty of it in this Gunna drinks review – and it’s well deserved.

WHILE YOU’RE HERE: Check out my Punchy Drinks review – another “grown up” range of soft drinks.

Let’s begin with the basics.

What are Gunna drinks?

Gunna drinks is a craft soft drinks brand based in the UK. They offer a range of sodas including “Muscovite” – a lemonade with mint, “Steelworks” – a cola flavour with ginger.

Gunna drinks are low in sugar (but NOT sugar free), and largely free of artificials and nasties.

With the credentials out of the way, let’s talk about taste.

I’ve started with Gunna’s Lemonade and Mint flavour because it’s my favourite. I have a case of it in my garage at the time of writing and am burning through it fast!

Gunna Muscovite is more than the sum of its parts and not at all what you might expect. When I first tried it, I expected something rather mojito-like, but it’s not like that at all. It has a smooth – almost creamy – mouthfeel, and the tastes blend together beautifully.

If you only try one of these Gunna drinks, I URGE you to give this a go. Every can is a real treat and – as I said at the start – my friends have all loved it too.

This one is a huge hit with me too, and my second favourite.

It tastes nothing like Coca-Cola or Pepsi. It’s more like a “traditional” cola flavour, with a little edge of cola-bottles sweets. The ginger is present but not over the top – it’s not like drinking something spicy. Just like the Muscovite, it all blends together so well, and is moreish and refreshing.

It doesn’t seem to deliver the same caffeine hit as the big names – I guess that could be a good or bad thing dependent on your point of view!

Gunna Pink Punk is very agreeable, but it’s not made quite the same impression on me as the others. It’s based on a Shirley Temple cocktail, and has a little ginger mixed in with the main flavours.

Don’t get me wrong, it’s a great soda, but it’s not a “wow” for me. That may just be personal taste. I’ve reviewed quite a lot of drinks now and there’s usually one in each range that doesn’t quite do it for me. It’s not the one I’d select to show off the Gunna range – but it’s still tasty and refreshing.

Another big hit – and one that is exactly what it says on the can!

I say that deliberately, because it tastes like high quality lemonade with an edge of ginger. Unlike the Muscovite it doesn’t create a surprising blend – it’s just what you’d expect, but no worse for it! I imagine (for those that do drink alcohol) that it would make a cracking mixer for spirits.

At the time of writing my Gunna review, I hadn’t had a chance to try these. (Heavy hint: if the Gunna people see this and want to send me some, I won’t complain!)

I will definitely be ordering some once my garage stash is depleted. As I’ve said, I’m very impressed with how the other flavours can be more that the sum of their parts, and I’m particularly excited about the tropical one.

I’ve reviewed a lot of drinks on this site since I stepped away from booze. Most of them have been sparkling flavoured waters, such as Loveau.

It’s important to emphasise that Gunna drinks aren’t the same. They have sugar, they have sweeteners and – yes – they have calories (though not that many).

Each can has about 73 calories in it. For me this makes them more of a “treat” drink. Prior to making healthier decisions I wouldn’t have believed I’d call 73 calories of soft drink a “treat.” I would have consumed that many calories in beer within half an hour of finishing work. But – hey – I like it when people say I’m looking slim!

The ingredients lists for Gunna drinks are clear and transparent. There ARE sweeteners (Sucralose) involved (I’d rather see Stevia, as in Trip Drinks), as well as some natural flavourings, and stabilisers and antioxidants in some flavours.

With this in mind, Gunna drinks aren’t for those trying to stay away from sugar and sweeteners completely – but they don’t pretend to be. In my opinion the balance is absolutely bang on – a perfect blend of sugar and sweetener that tastes just right and keeps the calories pretty low. As I said, I do view these sodas as a treat, but it’s a much healthier one that an aspartame-packed mainstream soft drink.

I should probably conclude my Gunna drinks review by assuring you that I don’t work for the company!

Joking aside, I really do love these. I’m genuinely excited to try the new flavours, as these drinks clearly have a huge amount of care and attention poured into them (see what I did there?) Give them a go and let me know what you think.

Where to Buy Gunna Drinks

I buy my Gunna drinks from Amazon, a case at a time. However I’m also seeing them in supermarkets now, and pub chains are starting to stock them. I suspect they’re going to quickly become ubiquitous, as Brewdog did with beer. It’s very much deserved: